The Ogoniland clean up, is a huge and complicated project.

One of the Dutch newspapers Trouw, published a story about the Bodo clean-up and why locals prefer money above a solution.

Bodo residents think that there is more money to earn from oil pollution. They want the cleaning to stop. The Nigerian fishing village of Bodo is as infected with oil as two years ago when the villagers concluded an agreement with Shells subsidiary SPDC. International cleaning companies were started but were chased away by residents.

In two court cases, villagers demand that the cleaning be permanently discontinued, says Chairman Inemo Samiama of Bodo Mediation Initiative. The mediation process supported by the Dutch government was successful until 2015, but has changed into a “hell journey” with a new conflict behind each turn.

Inemo Samiama rather does not say it as a self-made diplomat, but should lose it. “I’m from the Niger Delta, these are my people, but I’m amazed when I hear what they say, they demand money instead of cleaning, and what do you do when the money is gone, I ask them. Then you go die because of the environmental damage. ” Samiama notes that a minority of the population is completely disturbed. But if the lawsuits have not been revoked at the end of this month, the court of Oil capital City Port Harcourt will start a long recess and will go again for a summer.

On the river Bodo, a community of some 60,000 people, you can see the slices of oil on high up places. Boats are located along the banks of the river. Fishermen who have to do it with poisonous water and oil dives. Illegal refineries can be seen from the helicopter. Bald spots in green, with brown barrels and oil traces. No people, they will only come when it’s getting dark. 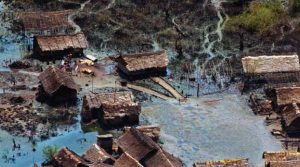 Tensions in the community

The spill at Bodo, caused by Shell’s invisible leakage in 2008, could have gone away, says Samiama, affiliated with several environmental organizations. In the Bodo project he worked with special envoy Bert Ronhaar, former ambassador to #Nigeria. Together they received the parties, despite the mutual suspicion. The agreement in 2015 was a triumph.

Minister Lilianne Ploumen said to hope that the project could be an example for other oil conflicts. In Bodo, 400 young people received a training course: Certified Oil Cleaner.

“Then it went wrong,” says Samiama. “The contractors were chased away. It took eight months to get everyone back to the table.” Samiama is tantamount to tensions in the community.

Money plays a major role. Residents think there is more to be done about pollution. That causes big problems, say Shell and Samiama. At the beginning of 2015, Shell paid £ 55 million damages following a ruling by a British court. Who had complained about the pollution got extra. So others got less. “The money has had a negative impact on the mediation course,” says Samiama. “The villagers became accustomed to earning money with pollution.”

“They see it as a property that yields returns,” says Shelll Precious Okolobo. Last week, the local king of Bono again asked for cash for secure contractors, he says. Shell mentions the situation and says that they can not force residents. Bodo Mediation Initiative reported in 2016 and called a lack of leadership in Bodo a problem. The personal interest would be for the community.

“Bodo is a very small part of Niger Delta, located in Ogoniland, whose cleaning can last for 25 years and for which a $ 1 billion fund needs to be filled. The risk of new pollution is real. We have no solution,” acknowledges Samiama. All creeks are connected to each other and carry the pollution from elsewhere. Also, the many destruction still can not be stopped.

Contact us now
If you have an idea or a problem concerning Nigerian business, don't hesitate to send us a message!
Go to Top